The Problem of Microclimates and Drainage Issues

Microclimates and poor drainage are two of the most prevalent and detrimental issues that nearly every grower has experienced. These issues are exacerbated by the industry wide push for increased density and yield, often cramming the maximum number of plants onto multi-tier mobile racking within the smallest footprint possible.

Microclimates and drainage issues both negatively impact plant health in a variety of ways. Microclimates are created when the environment within the grow cannot be homogenized, typically due to insufficient airflow throughout the canopy. Pockets of air with differing density, temperature, humidity and carbon dioxide content stratify within the canopy forming a mosaic of microclimates throughout the grow. The result is poor plant health and an inconsistent product.

Microclimates can be eliminated with the even application of airflow throughout the canopy, a challenge that the industry has historically struggled with. Drainage issues are typically related to tray geometry and can result in plants experiencing inadequate dry back, resulting again in inconsistencies. The Dual Draft system was designed specifically to address both of these issues, resulting in increased yield, plant health and consistency.

The Design Challenge and Status Quo

An effective tray design will provide a means to elevate the plants above a series of drainage features that serve to channel excess water and nutrients away from the plants and to one or more dedicated drainage locations. Many of the standard tray designs do not achieve this goal, either though lack of stiffness or inadequate pitch and drainage channel geometry. This results in “pools” of water forming around point loads caused by water laden plants as they push down on an inadequately stiff tray. Other designs have drainage geometry that is not deep enough to compensate for liquid accumulation due to out-of-level racking, resulting again in an inability to freely drain.

Achieving consistent airflow within the canopy envelope is a more difficult design problem, which until Dual Draft lacked a complete and effective solution. Traditional designs focused on over canopy airflow, either through oscillating fans mounted on the rack uprights or room walls, to rigid ducts or duct socks strung along the bottoms of the tiers on multi-tier racks in an effort direct some amount of airflow down onto the plants below. These systems offered a modest increase in delivery consistency over oscillating fans, but still failed to address the region most prone to developing microclimates; the triangular region formed between the tray and the bottom of the plant canopies.

This region can only be properly addressed with the addition of under canopy airflow, a premise which a growing number of studies agree with. There have been a number of recent attempts to provide airflow to address this region, all relying on duct socks, or the combination of interrupted trays (small trays that have space between them) and ducts socks. Some vendors are supplying so called “inter canopy” systems, which consist of duct socks slightly elevated to be at root level vs. tray level. This is indistinguishable from under canopy air flow for all intents and purposes, save marketing semantics.

Duct socks are problematic in this application for a variety of reasons, the most significant of which is the hassle associated with the sheer quantity of duct sock necessary to provide under canopy airflow. To reasonably fit within the under canopy space, the duct socks must be relatively small, on the order of 5 inches in diameter or less, resulting in a fairly small cross sectional area. There must then be a number of these duct socks (often 4 or more) running parallel between the plants to achieve relatively even flow distribution.

As an example, take a small 5000 square foot facility with 4 foot wide trays using duct socks for under canopy airflow on both tiers. This facility would require 1 linear foot of duct sock for each square foot of under canopy blowing area, or nearly 1 mile of consumable duct sock tubing to install, clean and periodically replace! This is in addition to the difficulty in placing, removing and trimming plants, removing debris from the trays and performing general tasks within the grow, such as spraying and adding beneficial insects to the growing media etc. There is also the added danger of ripping or kinking the duct socks and the hassle of dealing with tray cleanings with duct socks blocking access or sagging down onto the trays. This example only pertains to under canopy airflow; if simultaneous under and over canopy airflow is to be achieved (as it should), many systems would need nearly double the amount of duct sock.

Systems that use larger duct socks with interrupted trays to accomplish both under canopy and over canopy blowing potentially alleviate some of the issues associated with tray or low canopy mounted duct socks but open up additional potential issues such as debris falling onto the canopies of lower tiers and inconsistencies due to light bleed though from upper tiers etc. Cleaning and the potential to harbor pests on the fabric structure of these designs are also an issue. These systems still require a tremendous length of duct sock material and limit the size and configuration of grow media that can be used relative to a traditional tray surface. All compact duct sock solutions utilize duct socks with limited cross sectional area, leading to high losses and uneven discharge velocities over longer runs.

Dual Draft addresses the two critical issues of poor drainage and microclimates by integrating a highly efficient air delivery system within a fully draining cultivation tray. The design advantages to this arrangement are many fold.

Dual Draft trays are designed with a series of alternating ridges and valleys, where the ridges form a level growing surface and the valleys incorporate a peak in the center of the tray, which pitches to the outside edges and terminates in a gutter. Each gutter is drained via a standard barb fitting. The incorporation of the ridges and valleys give the tray a high degree of stiffness, which when combined with the aggressive drainage channel geometry allows for complete drainage without the possibility of wet feet and extended dry back.

The integrated air delivery system provides under canopy airflow not by adding problematic external ducting, but by utilizing the tray itself. By incorporating molded in under canopy ducts that fit transversely between the rows of plants, Dual Draft provides the industry’s most consistent under canopy airflow in a sleek and unobtrusive design. Dual Draft is also capable of simultaneously providing over canopy airflow as well as under canopy airflow by diverting a portion of the main duct flow down through the bottom of the duct and onto the canopies of the plants on the tier below, homogenizing the entire canopy envelope, opening the stomata and eliminating microclimates.

The Dual Draft design enables the use of a large distribution duct without the large footprint and hassle associated with multiple duct socks. In fact, the integrated duct has the equivalent cross sectional area of more than eight 4.5 inch duct socks! The large cross sectional area of the integrated duct allows for relatively low in-duct velocities, resulting in lower pressure drops and more consistent duct exit velocity along the length of a run. This feature allows the Dual Draft system to achieve amazingly consistent performance on extremely long runs. 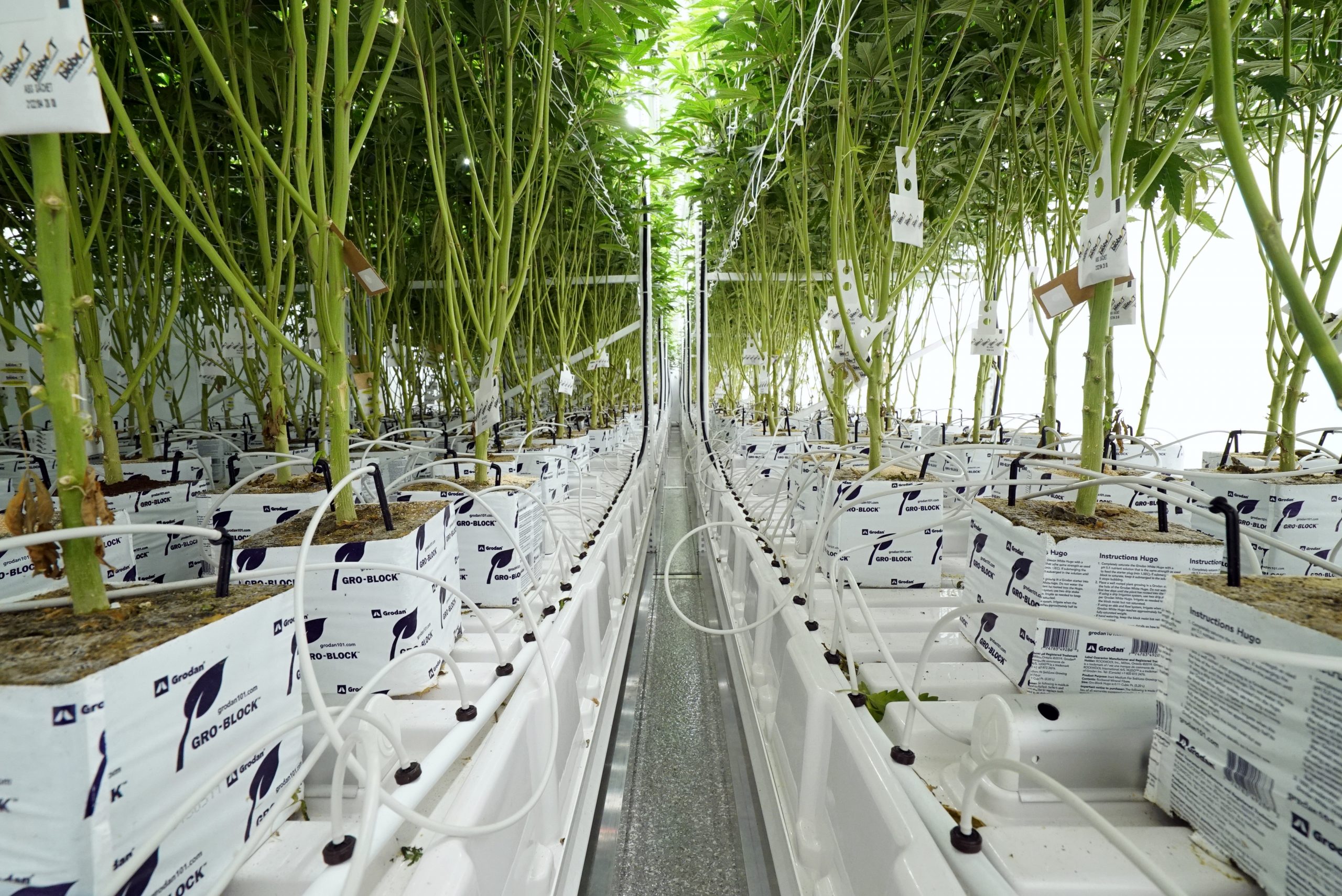